The Enlightenment and The Agricultural Revolution

This is an essay I wrote on the question of 'To what extent did Enlightenment ideas drive the agricultural revolution of eighteenth-century Scotland?' I have uploaded it here in the hope that people will enjoy it or at least find it of interest. The references are at the bottom and that has some gems of references, especially on JSTOR.

The Enlightenment was a period where educational attainment was increasing because of a wider access of the proletariat to education, specifically at a university level. There were a handful of universities in Scotland to attend, where as there were only a couple in England. This allowed for the creation of an educated middle-class. The earlier formation of ‘The Society in Scotland for Propagating Christian Knowledge’ had created something akin to an education system, through widespread and cheap availability of parish schooling, Professor Sir Thomas Devine says in The Scottish Nation

‘This was a distinctive feature of Scottish education, not found to the same extent in England or in Europe,’.

It was also a period of around 200 years, inclusive of Europe, where people started asking big questions and seeking answers to those questions in a manner that would be regarded, today, as a scientific method. One of the areas that was ripe for progression was agriculture, not in the ideas itself but in the process of inquiry and seeking betterment.

Farming sprang from pastoralism and agrarian society. There is evidence to suggest that agriculture started to take place across the globe during the Neolithic Revolution around 10,000BCE. This used the early domestication of plants and animals to provide a more stable nutritional supply that hunting and gathering wasn’t able to give. Farming took place in unenclosed fields which were near the settlements. Terraces and cultivation ridges, run rigs or lazy beds as they’re more modernly known, were used from the middle ages. This system resulted from the use of uni-directional ploughs or spades and allows for a far more productive strip of land as seaweed is laid on top as fertiliser and the furrows improved drainage.

To show how Enlightenment ideas changed farming practice, I think, we need to know how farming was practised prior to the agricultural revolution. As written here by James Donaldson in 1697, 26 years prior to the Enlightenment, we can get a little understanding of how, in this instance crofting, was undertaken.

This system was viewed by Donaldson as unfit to profit from as the land was too bare and over-worked. Instead he offered a method of greater rewards through the same or less work. He wrote of working the land on a 90 acre farm like this; Inner 24 acres, the croft, would have a rotational period of 5 years. As well as use of fruit trees to create an orchard, 2 acres. The fruit trees would be planted 30 feet apart so as to not impede on the sown ground. 1 acre (of orchard) would be grass, ½ an acre would be sown for cabbage/kale/root vegetables for the family. Of the 22 acres left, it would divided into 5 parts and dunged the 1st year with barley sown, each successive year would bring wheat, pease or oat, oat or pease and then grass or fallow. This allowed the 4 ½ acres to be dunged every 5 years with an abundance of dung available to do so.

The outfield to be worked in 3rds of its own. With a rotation of 3 years per 3rd which would allow the grassland that was overworked on a bi-annual rotation was allowed six years to lie with a third being ploughed for three years in succession.The use of an orchard on farm is one that is being promoted currently by Scottish Natural Heritage as a method of increasing resilience to climatic changes, improve animal welfare and to reduce the cost of keeping animals as they will eat the fallen fruit. This methodology, called Dehesa, is used in Northern Spain to this day.

The beginning of the movement can be said to begin in 1723, the time of foundation of ‘the Honourable the Society of Improvers in the Knowledge of Agriculture in Scotland’. It was the 1st agricultural society in Europe and was seen to be a nationally important undertaking. Membership, totalling 300, consisted of dukes, earls, lords, lairds and many more, excepting farmers or a tenant. Some of the big names involved crossed the political divide of the time; Lord Raey, Duke of Atholl, Earl of Seaforth, Grant of Monymusk, Duke of Perth and Lord MacDonald of Sleat. The early work of the improvers bore little fruit, with yields decreasing in the two decades after 1740 and output being sluggish until then. With this decline the first wave of upper-class improvers faded away. However, from 1760-1820 the transformation of agriculture was well underway. The increasing population in towns and cities were in a position to sustain higher grain and meat prices which, in-turn, sustained investment in agriculture leading to a near threefold increase in yield by the year 1800 compared to 17th Century averages.

The second wave was primarily differentiated from the first wave by no longer being the pursuit of the landowner, the ‘rural middle class’ were the main proponents. The thought processes changed as well, with a greater emphasis on evidenced outcomes and the use of reason to reach those outcomes. An important aspect of the second wave was that it was more readily available to the average farmer than in the 1st, no farmers had joined the Honourable the Society of Improvers even though it was free to them. Information during the second wave was disseminated through locally-based reports, magazines and societies, especially that of clergy and successful farmers. 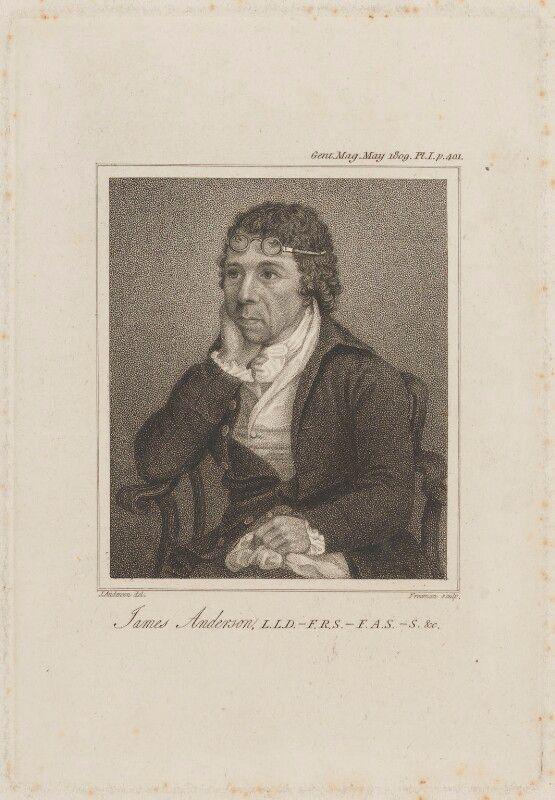 James Anderson was a good example of an Improver driven by the Enlightenment. Born in 1739, in Hermiston, Edinburgh, at 15 he inherited the tenancy of his parents farm when they passed away. He had already been attending lectures on Chemistry at Edinburgh University in preparation for taking over the tenancy. He married Margaret Seton, who had two-thirds of a farm in Aberdeenshire, which he became manager of. His keen interest in how machinery worked, both in practice and theory, enabled him to experiment and eventually create the Scotch Plough, a two-horse plough that helped improve productivity and reduce labour requirements for ploughing.

The culmination of the thought processes can be shown by looking at The Book of the Farm by Henry Stephens which remained in use until the 1910s. Similarly to James Anderson, Stephens had an early education in Chemistry at Edinburgh University and took an informal apprenticeship on George Brown’s farm.The book was regarded as the foremost practical guide to farming, focusing on small details and comprehensively guiding the farmer through the year of a mixed farm.The book was written to be accessible because Stephen’s had; bemoaned of them that they were ‘so verbose and theoretical that I soon laid them aside’

Acts of Enclosure were being used from 1604 to replace the use of informal agreements, from the 1750s the use of Acts of Parliament to enclose farmland was the norm.It appears that one of the biggest benefits of acts of enclosure was to remove cottar and tenant farmers that would allow for the expansion of field size as well as bringing other common land into private use.This manifested in Scotland as The Clearances where cottars and tenant farmers were removed from their homes, nationwide, in a relatively short period of time. The ideas from Improvement were that, far from reducing the number of people required in farming, there would be an increase and the work would be more stable and people would garner a higher income too. There was an acknowledgement that work would diversify with the new needs of the recently moved people. ‘In addition to demand for labourers, there would be an increased need for wrights, masons, ditchers, hedgers, shoemakers, weavers, tailors and other tradesmen who would all live in the new settlements.’

Some of the immediate repercussions from the agricultural revolution was that large groups of people, The Levellers Revolt in the early 1720s, started to tear walls and hedges down and cut the tendons of cattle in protest at the increasing enclosure of the common lands.This secondarily resulted in the formation of the Free Church of Scotland as the church was installing ministers that the congregation did not like. The installed ministers were often pro-enclosure and did little to help the evicted tenants. The congregations grew weary of this and formed a church where the congregation chose the minister to lead services.

The Enlightenment had a great influence on Agricultural Revolution in Scotland. It worked to increase the credibility of science through Natural Philosophy and Chemistry. The widespread access to schooling from “primary” through to university level was a boon and enabled the theory of improvement to occur.

The initial wave of Improvement failed in part because it only had the elites participating and very little in the way of revolutionary thought that would bring in increased yields. The second wave was benefited through the use of church ministers being used to help teach their congregations on how to improve their lands. Many of the ideas and practices of Enlightened agricultural practice remain today, like the use of lime, enclosed fields and mouldboard plough design that has evolved from the Scots plough. This is a testament to the thoughts and practicality of the improvements brought forward during the 18th century.It paved the way for the commercialisation of farming through great increases in yield and increased available income through formation of towns and clearing of people.

Some modern agriculture, particularly agroforestry, is being promoted today in the fashion of old agroforestry, see Dehesa, as a methodology to shore the landscape from climate instability and diversify farming income. Perhaps showing that modern farming, evolved from Improvement, is starting to become unsustainable.